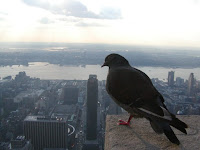 We are pleased to be in New York City this week as guests of The World Science Festival. Bernie will be addressing 'The Sixth Extinction' with scientific luminary Richard Leakey at Columbia University's Miller Theater.
An added note: they call it 'the city that never sleeps', we're guessing it has something to do with noise, the No. 1 'quality of life' complaint of city dwellers. In 2006, alone, there were 350,000 citizen complaints registered about just that; since 2007 there's been a 6% rise in that figure. CHIRP!!!
Posted by Katherine Krause at 9:56 AM No comments: