Check out the new GoogleEarth KML Layer at Wild Sanctuary 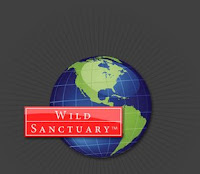 "Where" was where we shared our Wild Sanctuary sounds to the world of GoogleEarth. So many people doing such wonderous things - practically dazzling! Our gratitude to Tim O'Reilly, Brady Forrest, and all their talented crew for creating such a dynamic forum. Have you downloaded our KML Layer yet? See the Wild Sanctuary home page to put sound on the map! You'll hear samples from a wide variety of our favorite wild places, including the Arctic National Wildlife Refuge, Galapagos Islands, and an astonishing chorus of wolves within Canada's Haliburton Forest.
Posted by Katherine Krause at 7:06 PM 1 comment:

Everything happens somewhere - and Wild Sanctuary is going to be there when it does - at Where 2.0, the outstanding O'Reilly technology conference that will be mapping out the future of geospace. Our own Bernie Krause and Kat Krause, along with web-wizards Jesse Evans and Sam Evans, will be on-hand to present a new layer of possibilites featuring natural sound around the world. Meet us, when we put the 'there' in 'where', at the Fairmont Hotel, in San Jose, on Tuesday, May 29th, at 2:30 sharp. To visit to the Where 2.0 page, click on the headline for a link. Map courtesy graphicmaps.com
Posted by Katherine Krause at 7:12 PM No comments:

Thanks to US Coast Guard Petty Officer Jonathan R. Cilley, we offer this recent video clip from our time aboard the USCG Cutter 'Pike'. Everyone connected with this operation was a pleasure to meet and work with -- and we were proud to play a small part in the initial rescue attempts. The combined skills of the entire Animal Care Team and the rescue effort's vast support groups were truly impressive -- and the amazing response and overall guidance of Lt. Governor John Garamendi, and his office, was completely inspiring. May mother and daughter humpbacks, 'Delta' and 'Dawn,' find their way home to sea, as soon as possible.
Posted by Katherine Krause at 7:51 AM No comments:

"Whale Whisperer" Did It Once - Can He Do It Again?

This is a big day for us at Wild Sanctuary. Katherine and Bernie are on a coast guard cutter, Pike, in the Port of Sacramento hoping to lure the whales back to sea. This morning while they were meeting with Lt. Gov. Garamendi, they were informed that they have been dubbed the "Whale Whisperers" by the media...

This From News 10 Sacramento:

To get the job done organizers of the rescue are bringing in the same man who came up with the successful plan that saved Humphrey the humpback whale when he go stuck in the Sacramento delta 22 years ago.

Dr. Bernie Krause says there is a positive difference this time in that it won't take three weeks to figure out what to do. "We’re going to try one thing rather than 50 or 60 different things," said Krause.

The primary strategy is to lure the whales out of the deep water channel instead of driving them down river. There will be no banging of pipes from a boat at one end while whale songs are played from a boat at the other. The new technique will be to suspend an underwater speaker which will play whale feeding sounds recorded by Krause in Alaskan waters.

But, Dr. Krause says this is not Alaska and the situation is far more challenging than it was with Humphrey. "It's a much narrower channel for a much longer distance and we don't know how the sounds are going to play so, one never knows," said Dr. Krause.

Still, he believes the job can be done in 10 hours. Dr. Krause says Humphrey swam easily at seven miles an hour. If he can get the mother and her calf to swim at the same speed, Krause says the whales could be in the San Francisco Bay by the evening and on the other side of the Golden Gate Bridge by Friday.

"Watch what happens tomorrow," said Krause. "It's either going to be a big surprise, and everything's going to be great, or I'm going to be crying."

Wayward whales are back in the news. 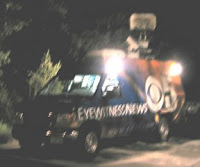 Tonight, Channel 5 is in the drive at our Glen Ellen studio! It seems that two 50-foot female humpback whales were seen swimming the wrong way up the Sacramento River. Right away, the news arrived to interview Bernie about the safe rescue of Humphrey the Humpback Whale from the same location some 20 years ago (returning to the delta 5 years later, attracting a new eddy of press). We hope the information we've shared will help this lovely pair of misplaced mammals to find their way home - guided safely back to the bay - very, very soon. Our thanks, Channel 5, for your coverage of this story.
Posted by Katherine Krause at 10:19 PM No comments: